Socialism takes a baseball bat to the head 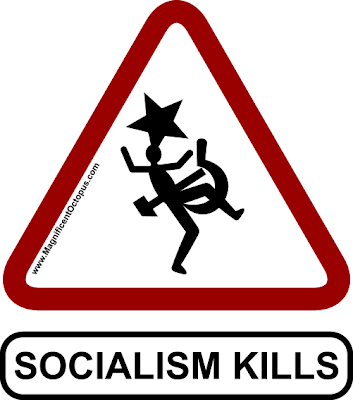 The Obama freight train that has been steamrolling American politics ever since his election one year ago ran squarely into a political brick wall Tuesday night, as Democrats suffered stunning setbacks in the Virginia and New Jersey gubernatorial races.
The big surprise: New Jersey, a blue state where Obama invested significant political capital by pulling out all the stops to try to put incumbent Democratic Gov. Jon Corzine over the top.
The president personally campaigned for Corzine three times, taped "robocalls," and sent his vice president to make two more appearances.

Yet despite the president and vice president repeatedly putting their personal prestige on the line, and despite a $10 million Corzine advertising advantage, the incumbent was unable to turn back the wave of dissatisfaction with the economy and high property taxes.
"There is a reason Obama went in over and over in Virginia and New Jersey," Wall Street Journal columnist and author John Fund told Newsmax. "He was worried what this would do to spook blue dog Democrats on healthcare . . . he was right to be worried."
GOP strategist Roger Stone told Newsmax, "The bloom is off the Obama rose."
Even Democratic strategist James Carville said the results show the GOP is “all gassed up” and suggested that the Republican sweep may undermine Obama’s legislative agenda, including his healthcare reform plans.
Fox News contributor and author Dick Morris describes the New Jersey result as "astonishing in a core Democratic state."
"It shows the apathy of the Democratic base, the erosion of the Democratic base, and the intensity of the Republican electorate," he told Newsmax.
With nearly all votes recorded, GOP challenger Chris Christie, 47, a former corruption-busting attorney general, becomes the first Republican in a dozen years to seize a statewide office in New Jersey.
Christie was declared the winner with 49 percent of the vote to Corzine's 45 percent. Corzine's defeat marked only the third time in the past 60 years that a governor in the Garden State lost re-election after serving only a single term.
Morris predicted, however, that the GOP sweep in Virginia of the Old Dominion's top three offices — governor, lieutenant governor, and attorney general — will have an even bigger impact on the nation's debate over healthcare and energy cap-and-trade.
In Virginia, Republican Bob McDonnell won the election over Democrat Creigh Deeds by a whopping margin of about 20 points. Obama, who carried both New Jersey and Virginia handily a year ago, had campaigned for Deeds as well.
"That sends a message to the 83 Democratic congressmen, who come from red states that [Sen. John] McCain carried, and the 20-plus Democratic senators who come from those states. And that message is you cannot count on Obama to carry you through. If you vote for a healthcare proposal that people don't like, you are on your own. And if Obama couldn't bail out Corzine in a blue state, and he couldn't bail out Deeds in a borderline red state, he can't bail you out."
That, Morris said, will have a heavy influence on the debate over the Obama administration's big-government legislative programs. The will affect the administration dramatically, he said, adding, "In retrospect this really could be seen as the high water mark of the Obama administration."
The results signal that the entire healthcare package is in trouble, and not just the public-option aspect of it, Morris said.
"Obama until now has not cared what the American people think. His whole approach has been just, 'Trust me, I won the election, and all the rest of you can get lost.' I think after tonight he can't say that anymore."
Posted by Pillar Of Autumn at 7:27 PM 2 comments: