US Editor Of The Economist: “Paper Dollar” And “Paper Euro” Will “Debase” In A “Big Way” 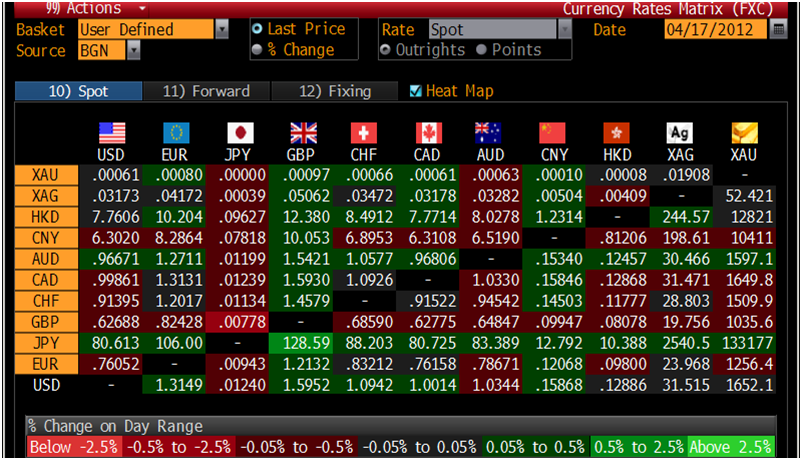 Cross Currency Table – (Bloomberg)
In volatile trade in New York yesterday, gold rose sharply prior to falling and ended $4.40 lower or 0.27% and closed at $1,651.70/oz. Gold initially took a dip in Asia and then recovered losses by the time European trading opened and has ticked higher.
Gold’s safe haven appeal is gradually rekindling as concerns deepen about Spain and the other periphery eurozone economies and a realisation that the eurozone debt crisis is far from over.
With the situation in Europe and globally set to deteriorate, the lacklustre demand of recent weeks, particularly in western markets may change to renewed robust physical demand.
There are signs of this already with inflows into gold-backed exchange traded products the most in five weeks last week, and silver holdings in the iShares Silver Trust, the biggest ETF backed by silver, rose 45.3 metric tons yesterday alone to 9,636.69 tons.

Gold 1 Year Chart – (Bloomberg)
This demand should support bullion prices at these levels and there is support at $1,600/oz. There is extremely strong support above the $1,500/oz level after prices consolidated between $1,500/oz and $1,800/oz since last September.
Spain T-Bill yields jumped at auction, meaning short-term debt costs surged higher despite strong demand.  Spain is to use the used and abused cliché “too big to bail” and the scale of the problem is so huge that most realistic observers warn that we remain in the early stages of this crisis.
The US Fed policy meeting next week may clarify the Fed’s ostensible position regarding further QE.
The weaker than expected March unemployment report is leading to further Wall Street demands for more stimulus plans. Wall Street and its institutions’ addiction to debt is leading to the continuing debasement of the dollar. Further QE is almost inevitable which will support gold.
US housing starts for March are released at 12.30 GMT which may lead to speculative price movements.
“People Have Lost Faith In the 20th Century Religion Of Government Backed Fiat Money”
Matthew Bishop, the US Editor of The Economist, has been interviewed by the Wall Street Journal TV about gold and why “people have lost faith in the 20th century religion of government backed fiat money.” 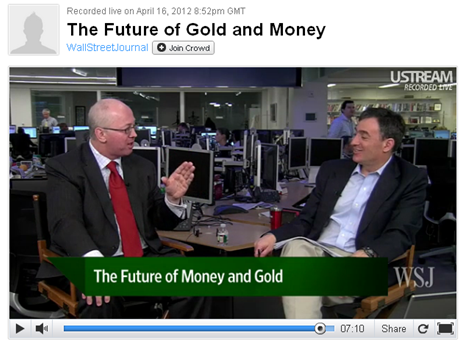 He says that he has become an agnostic or an atheist with regard to his belief in government-backed money as he fears that governments are in a position whereby they are going to debase currencies such as the “paper dollar and “paper euro” “in a big way.” Gold becomes one of the “alternative religions” in that environment.
History shows that a deleveraging downturn takes a long time and can take 7 or 8 years. Inflationary pressures are building and will be seen in the second half of the cycle, according to Bishop.
Bishop says he would put some of his money into gold but is prohibited from this due to the investment policies of The Economist.
He advocates owning gold as a “portfolio of money” and diversification and advocates having 5% to 10% of one’s money in gold.
Bishop is reluctant to give price predictions but believes gold will be higher at the end of the year and higher in 5 years.
The Economist magazine has a strong Keynesian bias and has been one of the most anti-gold publications in the world with many simplistic, unbalanced and ill-informed articles.
There have been a few more nuanced and balanced articles pointing out gold’s safe haven qualities primarily by “Buttonwood” however most coverage of gold has been negative.
The publication has suggested on many occasions since 2008 that gold is a bubble. Clients of GoldCore have told us that they were prompted to sell their gold bullion as long ago as 2009 after reading such articles in The Economist.
Indeed, there has often been a suggestion that those who buy gold are irrational “gold bugs” who are anti-technology and anti-progress. Indeed, some who have bought gold have been framed as “doom and gloom” merchants who are hoping for a collapse of the financial and monetary world so that they can profit from their dramatically revalued gold.
The Economist’s US Editor’s conversion and growing belief in gold as money and a superior form of money is an important development and is another step towards gold moving from the fringe to the mainstream.
It is another step towards gold being accepted, respected and trusted as a safe haven asset and safe haven finite currency.
Posted by Pillar Of Autumn at 11:22 PM

Considering the catheter tubing scam...diameter much smaller than tubes going into machine, deliberately.
This scam enabled these centers to play for dialysis day #4, 80% billable to the Federal government.
This is such an obvious scam it should have been addressed. Likely good catheter dialysis would hurt fistula numbers as well, which would not be tolerated.
FUck the gods. Wicked, immoral filth. Fuck how they use these monsterous organizations to perpetuate their strategy of decay upon the disfavored.
And it is happening with petrolium as well, which affects us all.