No Reality With TV 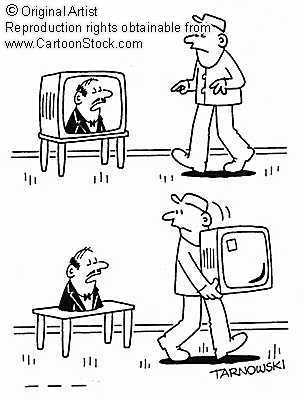 In a sound-bite society, reality no longer matters
William BlumOnline Journal Wednesday November 7, 2007
Last month, Israeli Foreign Minister Tzipi Livni told assembled world leaders at the United Nations that the time had come to take action against Iran.
"None disagrees," she said, "that Iran denies the Holocaust and speaks openly of its desire to wipe a member state -- mine -- off the map. And none disagrees that, in violation of Security Council resolutions, it is actively pursuing the means to achieve this end. Too many see the danger but walk idly by -- hoping that someone else will take care of it. . . . It is time for the United Nations, and the states of the world, to live up to their promise of never again. To say enough is enough, to act now and to defend their basic values."[1]
Yet, later the same month, we are informed by Haaretz, (frequently described as "the New York Times of Israel"), that the same, foreign minister, Tzipi Livni had said a few months earlier, in a series of closed discussions, that in her opinion "Iranian nuclear weapons do not pose an existential threat to Israel." Haaretz reported that "Livni also criticized the exaggerated use that [Israeli] Prime Minister Ehud Olmert is making of the issue of the Iranian bomb, claiming that he is attempting to rally the public around him by playing on its most basic fears."[2]
What are we to make of such a self-contradiction, such perfect hypocrisy?
And here is Fareed Zakaria, editor of Newsweek International: "The one time we seriously negotiated with Tehran was in the closing days of the war in Afghanistan, in order to create a new political order in the country. Bush's representative to the Bonn conference, James Dobbins, says that 'the Iranians were very professional, straightforward, reliable and helpful. They were also critical to our success. They persuaded the Northern Alliance [Afghan foes of the Taliban] to make the final concessions that we asked for.' Dobbins says the Iranians made overtures to have better relations with the United States through him and others in 2001 and later, but got no reply. Even after the Axis of Evil speech, he recalls, they offered to cooperate in Afghanistan. Dobbins took the proposal to a principals' meeting in Washington only to have it met with dead silence. The then secretary of defense, Donald Rumsfeld, he says, 'looked down and rustled his papers.' No reply was ever sent back to the Iranians. Why bother? They're mad."[3]
Dobbins has further written: "The original version of the Bonn agreement . . . neglected to mention either democracy or the war on terrorism. It was the Iranian representative who spotted these omissions and successfully urged that the newly emerging Afghan government be required to commit to both."[4] . . ."Only weeks after Hamid Karzai was sworn in as interim leader in Afghanistan, President Bush listed Iran among the 'axis of evil' -- surprising payback for Tehran's help in Bonn. A year later, shortly after the invasion of Iraq, all bilateral contacts with Tehran were suspended. Since then, confrontation over Iran's nuclear program has intensified."[5]
Shortly after the US invasion of Iraq in 2003, Iran made another approach to Washington, via the Swiss ambassador who sent a fax to the State Department. The Washington Post described it as "a proposal from Iran for a broad dialogue with the United States, and the fax suggested everything was on the table -- including full cooperation on nuclear programs, acceptance of Israel and the termination of Iranian support for Palestinian militant groups." The Bush administration "belittled the initiative. Instead, they formally complained to the Swiss ambassador who had sent the fax." Richard Haass, head of policy planning at the State Department at the time and now president of the Council on Foreign Relations, said the Iranian approach was swiftly rejected because in the administration "the bias was toward a policy of regime change."[6]
So there we have it. The Israelis know it, the Americans know it. Iran is not any kind of military threat. Before the invasion of Iraq I posed the question in this report: What possible reason would Saddam Hussein have for attacking the United States or Israel other than an irresistible desire for mass national suicide? He had no reason, and neither do the Iranians. Of the many lies surrounding the invasion of Iraq, the biggest one of all is that if, in fact, Saddam Hussein had those weapons of mass destruction the invasion would have been justified.
The United States and Israel have long strived to dominate the Middle East, viewing Iraq and Iran as the most powerful barriers to that ambition. Iraq is now a basket case. Iran awaits basketization. And, eventually perhaps, the omnipresent American military bases, closing the base-gap between Iraq and Afghanistan in Washington's encirclement of China, and the better to monitor the flow of oil from the Persian Gulf and Caspian Sea areas.
There was a time when I presumed that the sole purpose of United States hostile policy toward Iran was to keep the Iranians from acquiring nuclear weapons, which would deprive the US and Israel of their Mideast monopoly and ultimate tool of intimidation. But now it appears that destroying Iran's military capability, nuclear and otherwise, smashing it to the point of being useless defensively or offensively, is the Bush administration's objective, perhaps along with the hope of some form of regime change. The Empire leaves as little to chance as possible.
Posted by Pillar Of Autumn at 12:33 AM