A Nuclear Sub For Brazil???? 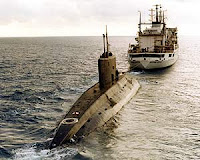 Brazilian defense officials announced plans to build their first nuclear submarine last week. Is Brazil preparing for war? Worried about foreign nations patrolling their waters? No… just looking after their oil… "When you have a large natural source of wealth discovered in the Atlantic, it's obvious you need the means to protect it," said defense minister Nelson Jobim last week. Brazil, which has been discussing nuclear submarine production for decades, is finally moving forward, thanks to the gigantic Tupi oil discovery it reported earlier this month. The Tupi field is believed to contain up to 8 billion barrels of oil. Brazil has no official enemies in South America, nor has it been the target of any significant terrorist threat. However, the Tupi field could boost Brazilian reserves by as much as 62%… Brazil doesn’t seem interested in taking any chances.
Posted by Pillar Of Autumn at 12:38 PM