Space Wars: Coming To A Planet Near You 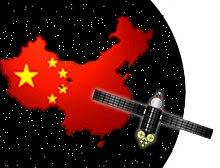 Pentagon wants to create space vehicle to fire missiles anywhere on Earth
John ByrneRaw Story Monday November 12, 2007
$100 million from sub-missile program
Buried in the 621-page House-Senate conference report on the Defense Department appropriations bill -- and page A19 of Monday's Washington Post, is a $100 million request to enhance space warfare.
As if it didn't already have enough work in Iraq, the Pentagon plans to divert funds from an appropriation to improve submarine-launched Trident missiles to develop a "global strike" program which would allow the US to target and dispatch a "precision-guided" warhead anywhere in the world within two hours.
"The new program, dubbed Falcon, for 'Force Application and Launch from CONUS,' centers on a small-launch-vehicle concept of the Defense Advanced Research Projects Agency," veteran intelligence reporter Walter Pincus reveals in today's paper. "The agency describes Falcon as a 'a reusable Hypersonic Cruise Vehicle (HCV) capable of delivering 12,000 pounds of payload at a distance of 9,000 nautical miles from [the continental United States] in less than two hours.'"
"The vehicle would be launched into space on a rocket, fly on its own to a target, deliver its payload and return to Earth," he adds. "In the short term, a small launch rocket is being developed as part of Falcon. It eventually would be able to boost the hypersonic vehicle into space. But in the interim, it will be used to launch small satellites within 48 hours' notice at a cost of less than $5 million a shot."
Falcon is part of the $459 billion military bill before Congress.
Pincus says the House and Senate also added $100 million beyond Bush's request for "space situational awareness," legal jargon for protecting US satellites in space and being able to attack "the enemy's satellites."
"Enhancing these capabilities is critical, particularly following the Chinese anti-satellite-weapons demonstration last January," the House-Senate conferees wrote in thereport, referring to a January incident in which the Chinese targeted and destroyed a weather satellite in orbit.
An earlier iteration of this story characterized the space vehicle as a satellite, which it is not under a strict definition of the word.
Posted by Pillar Of Autumn at 7:22 PM