They're Getting Bolder In Their Support For The Amero 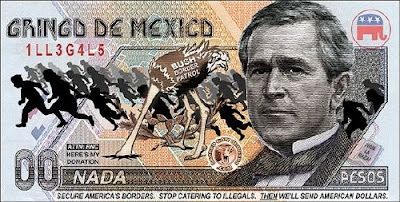 By Jerome R. Corsi© 2007 WorldNetDaily.com
Stephen Jarislowsky, a billionaire money manager and investor the Canadian newspaper Globe and Mail bills as the Canadian Warren Buffet, has told a parliamentary committee Canada and the United States both should abandon their national dollar currencies and move to a regional North American currency as soon as possible.
"I think we have to really seriously start thinking of the model of a continental currency just like Europe," Jarislowsky told the Canadian House of Commons' finance committee, according to the Globe and Mail in Toronto.
Jarislowsky's call for immediate action belied an article published in the Boston Globe on Sunday that said the call for the amero to become the new North American regional currency was "purely theoretical."
In an exclusive telephone interview with WND, Jarislowsky repeated his call for a European Union-style currency to be created between Canada and the United States.
"The idea would be a European Union-type set-up," Jarislowsky said, "with a North American Central Bank that would issue the new currency and sit over the Bank of Canada and the Federal Reserve Bank in the United States."
"An alternative would be to create a peg on the U.S. dollar which would allow the Bank of Canada to adjust the Canadian dollar in a 5 percent plus or minus range, based on the fluctuation in value of the U.S. dollar," he explained.
Still, Jarislowsky was less confident the U.S. dollar peg would work.
"The Bank of Canada only pinpoints inflation," he told WND. "My idea would be to have the Bank of Canada manage the Canadian dollar with a view both to inflation and the U.S. dollar. The Bank of Canada has never been very receptive to this idea."
Jarislowsky insisted Canada was going to be forced to do something because the increased value of the Canadian dollar vis-à-vis the U.S. dollar was likely to depress business activity in Canada and cause a recession.
"Two-thirds of the Canadian economy is tied to the U.S. economy," Jarislowsky pointed out. "Some 85 percent of our exports are headed for the U.S. market. Our economy is tied to the U.S. dollar, whether we like it or not."
In an interview published with the Globe and Mail, Jarislowsky emphasized the likely adverse impact on the Canadian economy triggered by the rise in the value of the Canadian dollar.
"We don't have a single mill in Canada which isn't losing cash at the current exchange rate despite the fact we invested hundreds of millions in dollars into new equipment when we had the money," Jarislowsky said.
"I believe that if we stay at the present levels, the entire forest products industry practically is going to be in liquidation-bankruptcy and there's going to be an enormous loss of employment," he continued.
Jarislowsky told the House of Commons finance committee that a regional North American currency would reduce the adverse currency exchange risk being experienced in Canada since the Canadian dollar has risen more than 20 percent against the U.S. dollar this year.
Jarislowsky brushed aside stated opposition from the Canadian Finance Department, including a negative recommendation to Finance Minister Jim Flaherty because of concerns a common North American currency would mean an erosion of sovereignty for Canada.
"I know Finance Minister Flaherty quite well," Jarislowsky told WND. "Sure, first he will have to deny he is taking seriously the idea of a new currency, then later he will come out and say he was forced to create one anyway."
Jarislowsky insisted he made very seriously the suggestion to create a euro-style currency for North America.
"Pretty soon, the Finance Ministry will have no choice but to create a new currency," Jarislowsky argued, "unless the Canadian dollar all of a sudden changes course and reverses against the U.S. dollar all on its own."
"In the provinces we are already seeing economic activity slowdown because of the rise in value of the Canadian dollar," he insisted. "If our automobile and lumber industries begin to decline, we will have a serious recession as a result."
"The Finance Ministry knows how closely our economy in Canada is tied to the U.S. market," he continued. "A common currency would avoid the problems we are now facing with currency exchange risk added to the normal risks of doing business."
Jarislowsky currently heads the Canadian investment firm Jarislowsky Fraser Limited, headquartered in Montreal.
According to Canadian Business, Jarislowsky has amassed a personal fortune of $1.2 billion, ranking him as the 25th richest person in Canada.
Canadian Business also claims the average private client at Jarislowsky Fraser typically has more than $10 million in liquid assets to invest.
Forbes put Jarislowsky's net worth at $1.5 billion, ranking him No. 512 in the list of the world's richest people in 2006.
Forbes estimates that Jarislowsky Fraser currently manages $50 billion for a select list of institutional clients and high-net-worth individuals.
Jarislowsky's 2005 book, "The Investment Zoo: Taming the Bulls and the Bears," was a business best-seller in Canada.
The Canadian dollar reached parity with the U.S. dollar at the end of September. Since then, the Canadian dollar has been trading above the U.S. dollar, at values not seen since the 1960s.
The Canadian dollar closed yesterday at $1.01 to the U.S. dollar on major currency exchanges.
Canada's Finance Department did not respond to WND requests for a comment.
Posted by Pillar Of Autumn at 8:57 PM